Mousa the 14
Mousa the 14: The cynical, sarcastic, and frankly, no nonesense guy who hangs around tvtropes.org all day. Self-proclaimed World's greatest Arteest and Writer. A single, liberal, heterosexual, overweight, bespectacled, black male from Northern Virginia.

Hello I'm the WebcomiCritic, I do it because, well... Somebody has to! 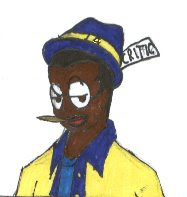 Ladies and gentlemen, a miracle has occurred. No, Tim Buckley did not learn how to improve is art. Neither did Mookie. F@NB0Y$ didn't get a consistent update schedule and Shredded Moose did not become a respectable webcomic. El Goonish Shive hasn't cleared up a single subplot and overarching plot. And The Wotch didn't decide it was going to get better.

I'll show you the miracle:

Scott Rasoomair, better known as the well dressed but not at all interesting Pantsman, suddenly decided to make a funny joke. He decided for once that "Hey, I'm going to do a comic that's funny and won't involve toilet humor and bad jokes deriving from rape, murder, and poo." (I'm not going to provide examples. You'll stumble upon it in nearly every page of his archives.) He actually did a good comic that poked god fun at the mechanics of the Legend of Zelda Ocarina of Time. I'm shocked. I'm touched. For once, a comic that doesn't insult our intelligence by making comics that could only appeal to the baser humor of Jocks and 7-year olds.

Oh, and here's another one:

The art got BETTER.

This guy is dishing out miracle after effing miracle! Maybe next time his artwork will be good with a funny comic. But what about this comic? I doesn't seem funny; If there was a joke in there, I never got it. maybe it's for some niche audience I don't know about. But who cares about that?

Look at this! The art is amazing! shadows, unique facial features, no over use of googly eyes, detailed looking backgrounds and terrain. I can't even do that!

Whatever the reason may be, he better scrap that reason and keep doing this. You hear that Pantsman? KEEP DOING THIS! KEEP DOING GOOD WORK! THEN MAYBE THE INTERNET WILL STOP LOOKING DOWN ON YOU!

"Broforce" -Chet and JR. Yes, it is stupid and over the top.

-Read Or Die You Uneducated Buffoons
The Webcomicritic
Posted by Mousa the 14 at 11:35 AM